We took two types of road trips.  The first one was when we drove as far as the Volvo wanted to take us.

As we traveled through the countryside I enjoyed the mountains  and the clouds until the left blinker stopped working, the freeway was downhill, rain was pouring and there were trucks in several lanes.  I set aside the California tour book and read the car manual.   My husband  was sure by wiggling some wires he could correct the problem.   We turned on the lights in a heavy downpour and the dashboard dimmed.   It was normal for our car to act up, it had over 260,000 miles.  We patiently drove in the right lane until we got to a rest stop.   We called our mechanic from a payphone.   This was the 90’s when coin operated payphones were everywhere.  Alberto confirmed that it was a bad fuse,  we should just replace it.    This was a modern rest stop with vending machines.   One of them was filled with car-parts, including a box of fuses.

The rain stopped.  As we continued to drive I was happy to hear the click-clack of the blinkers.   The dashboard lights were still dim and we decided to skip some of the sightseeing so we would get to the hotel before dark.  We adjusted our itenary for the whole trip just in case the headlights became moody. 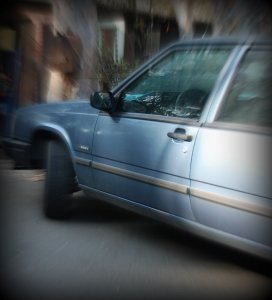 A year later we visited the gold rush towns in California.   I was reading about Mark Twain in Murhys  when the car started making strange noises.   Later the churning went away and my husband gave the Volvo an Italian tune-up.   He drove as fast as the car could go, to clean out the gunk.  This was Alberto’s advice before the trip.  The car was shaking, my eyes were glued to the rear-view mirror checking for police when John slowed down.  He had trouble holding the wheel because of the vibration.   He was sure the car was in much better shape now.

The hotels I booked would let me cancel till 6 pm that day.  I thought they invented this rule for people who dared to travel in old cars.  Half-way on the trip the engine got stuck in 2nd gear.   Being an automatic car, it wouldn’t go faster then 25m/hr.  We cancelled the rest of the lodgings.  The car shop in Jackson didn’t have the parts unless we waited three days.  We telephoned Alberto then decided to drive home, over 400 miles in second gear.  My husband explained that we might blow the engine then we would get towed to a local mechanic, hopefully this would happen near a bigger town.

Since we were driving 25 m/hr I could leisurely read the billboards and signs for auto repair shops and occasionally shouted over the engine noise “There! A Volvo dealer.”  The car was still moving so we didn’t exit the freeway.  The engine was rattling, I concentrated on my tongue so I wouldn’t bite it again.  I forgot to worry about the police giving us a ticket because we drove under the minimum speed limit.  We were three miles from home when the car shook and begun humming quietly.  It was shifting properly.  Next day Alberto checked out the car and couldn’t find anything wrong with it.

The second type of trips were when we followed a plan.  The hotels were prepaid to get discounted rates  and we looked for signs for restaurants and national park entrances.  We enjoyed picnics and panoramic views on mountain tops without worries of a moody car.  On these vacations we drove a Prius but that’s another story.

I travel to Blairgowrie, Scotland with three of my high-school friends.   Although we are Yugoslav citizens we are allowed to work in Great Britain if a British citizen offers us temporary employment.  We have work visas for six weeks and we join other students in a summer camp.

The sky is gray most of the time. Finally, the sun shines for more than two hours. My bucket is half-full of strawberries.  With both hands I pull off the ripe berries while I’m careful not to squeeze them.  The bucket can’t have any leaves, stems, or straw because it would spoil the jam.

It is 10am and my fingers are swollen.  When I pinch off the green stem a tiny bit of fruit juice drips on my fingers.  Then the straw around the plant sticks to my hand.  I marvel at the perfect berries and taste another one.  Delicious, like each one I had before.  I never thought that a fruit could grow to be this sweet under a gloomy Scottish sky.

I earn 3 pence per pound of fruit.  I wonder how many buckets I will fill up today.  I’m determined to earn the most I can.  If I work hard by the end of the day I’ll have 3 or 4 British pounds, unless it rains.              END_OF_DOCUMENT_TOKEN_TO_BE_REPLACED