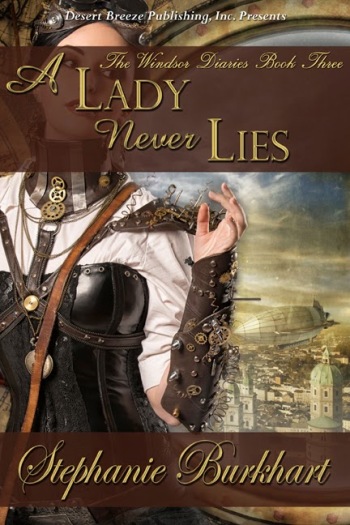 Jocelyn Dunkirk is not your typical Victorian lady. She dresses in leather, wears goggles and is not afraid to get a little grease under her fingernails. Gentlemen avoid her like a dirty rivet.

Richard Windsor, the Prince of Wales, travels through time to claim Jocelyn’s heart, but if it isn’t one challenge, it’s another. He determines to be a constant, steady presence in her life, hoping to prove he’d make a worthy husband.

Jocelyn’s facing a bucket full of problems. The Prime Minister wants her to assist in ending a coal strike before it cripples the nation while her father attempts to recover from a serious injury. Will Jocelyn’s dedication to her country and family ruin the one chance she has at love?

An Excerpt from A Lady Never Lies

Jocelyn froze, stunned to find herself face-to-face with Richard. She’d hoped he’d come back for her, but not like this. She brushed aside her sudden surge of happiness as she glanced at her father. He struggled to maintain his composure.

“We need to leave,” the doctor said.

Richard rushed to her side, placing a hand on her elbow. His expression filled with longing — and concern. “Jocelyn–”

Keira leaned forward. “The ring you left behind exploded.”

Jocelyn turned away. She had to keep her focus on her father when she could be assured of her father’s well being, then she’d deal with Richard’s reappearance. They entered a hall that the servants used and headed toward the exit.

Stephanie Burkhart is a 911 dispatcher for LAPD.  She was born and raised in Manchester, New Hampshire.  After serving 11 years in the US Army she currently calls Castaic, California her home. Stephanie was married in Denmark in 1991 and has two young sons. She adores chocolate, is addicted to coffee and enjoys early morning walks.  She’s also an assistant den leader for her son’s Cub Scout den and is a Boy Scout mom. She writes paranormal, contemporary, and steampunk romance and has two children’s books published with 4RV Publishing.

FIND ME ON THE WEB AT:

Enter to win a $25 Amazon GC! A Rafflecopter Giveaway [Editor’s note: The giveaway is closed.]

8 thoughts on “A Lady Never Lies by Stephanie Burkhart”